Traditional Ukrainian dishes will be served during the festival.

Amid the Russian invasion of Ukraine, the United Church of Christ near Wyoming is set to host the Ukrainian Food Festival on April 24, from 12 p.m. to 4 p.m., to support and celebrate the Ukrainians.

The city was open in its support for Ukraine after the Russian invasion, and that support even led to the march from downtown Cincinnati for Ukraine in late February. 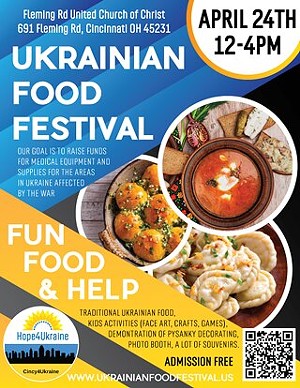 Organized by two local charities – Cincy4Ukraine and Hope4Ukraine – the Ukrainian Food Festival celebrates Ukrainian culture by showcasing the country’s dances, folk music and food. There will also be activities for children, a photo booth, lots of souvenirs and pysanky (Easter eggs decorated with traditional folk motifs), according to a press release. Ukraine celebrates Easter on April 24.

Admission to the festival is free and all sales from the event will fund “equipment and medical supplies for areas of [Ukraine] most affected by the war,” according to a press release. This aid will also benefit Cincinnati’s Ukrainian sister city, Kharkiv.

The United Church of Christ is located at 691 Fleming Road, Wyoming. For more information, visit facebook.com/events.

Send CityBeat a news or story tip or submit a calendar event.