The New Australian Opera Antarcticwhich premiered this week at the Holland Festival to standing ovations, is as ambitious as a flying cellist, as expansive as Berlioz’s account of the Trojan Wars and cruel as Wagner’s twilight of the gods: it depicts the crash of the Enlightenment mindset against this vast and unforgiving plane of ice. The task of preparing it in Sydney during the pandemic and then staging it in the Dutch capital of world trade in the 17th century is a feat to compare with the first Aida in Cairo. (Ed: Read more about the labor context in this feature article in our June 2022 issue.)

The plot is unlike anything in the tradition of grand opera: no tenor is in love, and there is no prima donna. This is not a personal conflict between characters. Structured like a collection of paintings, it features even less development and causality than Schönberg’s convention-breaking masterpieces of a century ago. Libretto by Tom Wright includes plenty of incisive poetry lamenting the grim Deep South, but the work is best enjoyed focusing on Mary Finsterer’s magnificent music rather than watching for any telltale dramatic action.

Perhaps the best known precedent is Pierre Grimes, where Britten gives many of the best numbers to the orchestra alone, making the sea a character drawn in its various moods, an antagonist to the inadequate fisherman Peter. Here, a relatively small instrumental ensemble and electronic samples speak like the ice-covered continent, against which European explorers and all humans are ill-equipped for their aspirations and the attendant trials.

Finsterer’s intricate yet easily graspable orchestration shifts from the intimate delicacy of a child’s music box to a vast, enveloping panorama that makes most Hollywood sci-fi soundtracks less epic in comparison. The Dutch ensemble Asko|Schönberg, which commissioned the score, is one of the best contemporary music groups in the world; they were here accurately conducted by Jack Symonds, whose Sydney Chamber Opera also premiered Finsterer’s earlier opera Biography in 2017. 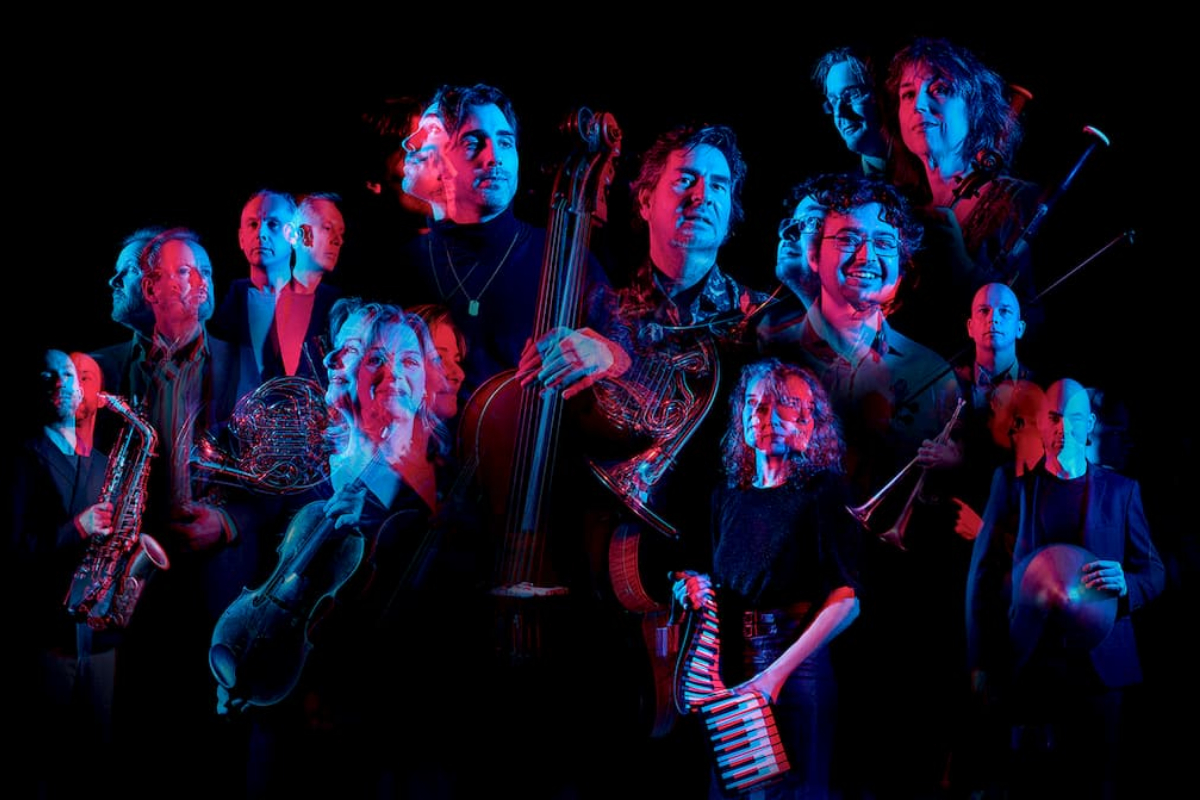 Elizabeth Gadsby’s impressive, almost overwhelming ensemble is framed like a 30-foot square of video panels; it has similarities to the East Antarctic Ice Shelf: unusual, very large, usually very white, and sometimes extremely bright. Complementary lighting by Alexander Berlage also covered a strip between the small orchestra pit and the giant screen, along which a child walks very slowly. Even music buffs who regularly close their eyes during operas will sometimes notice a white light penetrating their eyelids.

Perhaps director Imara Savage’s intention was to throw a gigantic spotlight on audiences as they reflect on their relationship to a continent they’ve never set foot on. Ever since Monteverdi’s pioneering 1607 fable of Opheus’ journey to the infernal regions, opera has served as a seat of travel to unreachable destinations. Here, a kind of catharsis is achieved by sharing the goals of the Enlightenment, and feeling the failures and disappointments of the characters, with bright light all around.

Savage eschews the obvious opportunity to insert breathtaking landscape drone video like one might find in an IMAX theater: that would take the focus away from the music and turn it into a mere accompaniment. Instead, video designer Mike Daly uses this gigantic canvas of color pixels to suggest, with clumsy low-res black-and-white lettering of latitude and longitude, how little of this vast, inhospitable region humans can ever appreciate. .

Two spaces are cut into the screen: one for the child who watches silently; the other a mist-filled Plexiglas aquarium positioned as a royal box. It’s hard to imagine a more inhospitable platform for the singers who, after their long flights from Australia, must have felt a certain kinship with the intrepid 19th-century travelers they portrayed. Wright names his characters as archetypes such as The Theologian (Jessica O’Donoghue), The Cartographer (Michael Petruccelli), and The Natural Philosopher (Anna Fraser); this trio in Victorian costume delivers one of the most striking acts behind the three Plexiglas panels. This could only succeed with excellent sound engineering and design, credit to Arne Bock and the exceptional acoustics of the auditorium of the Muziekgebouw, one of the most prestigious spaces for contemporary music in Europe. 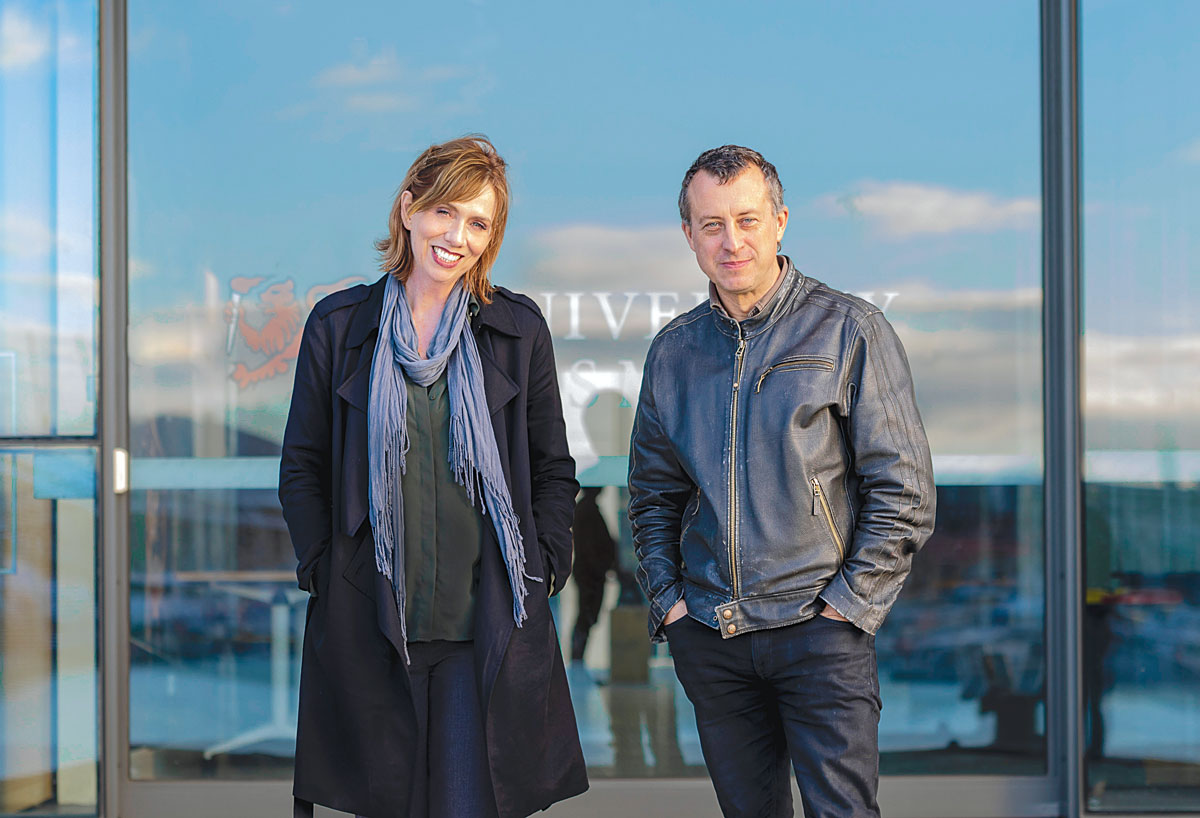 Mary Finsterer and Tom Wright at the Antarctic Symposium at the University of Tasmania. Photo © Dean Golja.

A few questions spoken in English by a resounding disembodied voice seem heavy compared to the many expansive and charming passages sung in Latin; these animate the conflict between religious dogma and science: Mappa mundi (world’s map), prima creature (the first creature), and long lists of taxonomic names of species, which also fill the screen in a graceful typographical ballet.

Among many striking numbers, perhaps the most confronting tune was the curse of Captain (Simon Lobelson), worried about his mission, frustrated with speculative or even fictitious navigational information, freezing and dying at the tip of the colonial exploration. Obviously, we’re not just entertained: it’s a warning, awe-inspiring as well as wonder. But no details are given on whether it’s the ozone layer, or sea level rise, or billionaires’ joy flights to Mars, or the proliferation. nuclear, or any other step on the road to the collapse of civilization.

Even six decades after the 1961 Cold War-era treaty established an international agreement over ownership of Antarctica, the southernmost continent remains unconquered by human intruders. This magnificent musical portrait of humanity’s slowly shattered geopolitical dreams gives us an important opportunity to reflect on the relationship of our belligerent, expansionist civilization to the only continent we have left uninhabited. These vast, melting layers hold hard lessons for us, and this opera sheds a dazzling light on many of them. The premiere in Amsterdam was undoubtedly a milestone for Australian opera, and may also prove a landmark for the chamber opera genre, as it clearly surpassed in impact a production typical of the great classics of the 19th century such as the Flying Dutchman, in just 90 minutes. Anyone can access the next production of Antarctic should definitely try hard.

Antarctic premiered at Holland Festival 2022 on June 5 and 6. The complete credits, the program and the booklet are available on the the festival website.